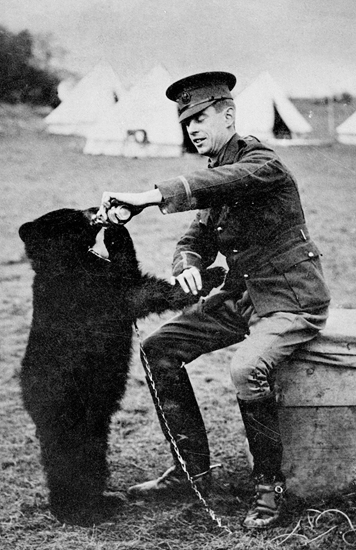 Many zoo professionals often prefer an unemotional approach to animals, which could be acceptable if we only considered animals gene carriers, genes we should save and preserve for the future. This approach is an important condition of population-level conservation work, but… we also have to consider the emotional aspects in the case of zoos. Here many animals have a name, are loved and followed individually by visitors. Even zoos force this kind of impersonation, which could help with the propaganda, education work and increase the income. It is not a new phenomenon, there have been Knut-like favourites in the early era of modern zoos too. Some zoo heroes even entered literature, as did the world’s most famous bear cub: Winnie-the-Pooh. Let’s see, who was Winnie originally!

Shortly after the outbreak of World War I a Canadian cavalry named Lt. Harry Colebourn, veterinarian officer, made a strange bargain at a train stop in White River, Ontario. He adopted a seven-month-old female bear cub for $20. As he got to know from the hunter, she was the surviving one of twins, and her mother had been killed in the summer of that year. She was an American black bear (Ursus americanus), which is smaller and more common in North America than brown bears (Ursus arctos). The playful cub got the name “Winnipeg Bear” after Colebourn’s home city, but later she was called “Winnie”. 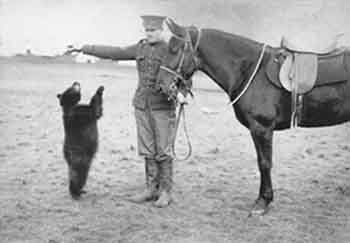 Winnie followed its new owner to England. She became very popular among the soldiers, it was the official mascot of the Canadian Army Veterinary Corps. However, when Colebourn went to France, he had to leave the bear at London Zoo in 1915. He originally considered this a temporary solution, he would have liked to return Winnie to Canada, to Assiniboine Park Zoo in Winnipeg after the war. However, the people of London had fallen in love with the cute and playful bear. So, the vet finally decided to allow her to remain at the zoo. Colebourn survived the world war and started a private practice in Winnipeg. He died in 1947.

Among the visitors who adored Winnie, was a small child, Christopher Robin Milne, who named his toy bear after her favourite animal. His father was Alan Alexander Milne, the noted author, who made Winnie-the-Pooh (Pooh was a swan they had met on a holiday) the main character of the book Winnie-the-Pooh (1926) and The House at Pooh Corner (1928). These novels became popular worldwide, the character is still the most known bear in literature and pop culture.

Winnie remained the favourite of London Zoo, until she died on the twelfth of May, 1934. A black bear can live up to about 30 years, the recorded maximum was 39 years. The relatively early death might have been caused by her high popularity, as visitors loved to feed her sweet things, for example honey. According to her remained skull, Winnie had serious dental diseases and – as we can see in the photos – she was very fat, similarly to honey-loving Winnie-the-Pooh, the literary character that made her unforgettable.

contentmap_plugin
made with love from Appartamenti vacanza a Corralejo - Fuerteventura
Tweet