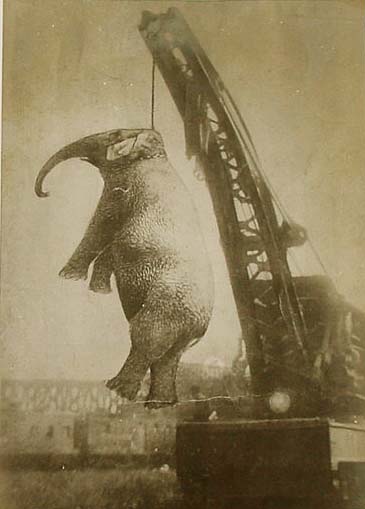 You might see this photo, and thought about it whether real or fake. Nevertheless, the old picture is strange enough, you can see hanging of an elephant. What is the story of it? Was it a real execution and what was the sin of this luckless animal? The story of Murderous Mary was really sorrowful likes a ballad about the miserable life of a circus elephant and the bloodthirsty crowd which didn’t mercy on her. What is the truth about this story?

Erwin, Tennessee, 1916. A small town in the motherland of Klu Klux Klan where people occasionally like to justice itself by some lynching. On 13th of September a circus provided this kind of social experiences for the inhabitants and visitors of the town: after the matinee performance a free public hanging was announced, the execution of a notorious killer. The sinner was an Asian elephant…

In the medieval ages it was not rare that animals were sentenced to death in courts. However, in the modern ages it was not part of the legal system, but in this case the public hysteria and economic consideration led to this bloody revenge and brutal attraction.

In the early years of 20th century, before the mass media ruled the World, the travelling circuses had important role in entertaining people of small towns. The “Sparks World Famous Shows” was one these circuses, which provide the possibility of collecting the hard earned dollars of American families. It was no doubt that the greatest star of this circus was Mary, the giant Asian elephant. She was born in 1894 and circus bought her at the age of 4. Charles Sparks, the owner and his wife considered the elephant more than an animal, she was brought up a children of the childless couple. Sparks preferred “gentling care” philosophy as he told it to Walter “Red” Eldridge, the totally unexperienced keeper who was hired on 11th of September. The new keeper’s job responsibilities included watering elephants and preparing them for the shows.

The next station of the circus was Kingsport which was overcrowded because of a county fair. Sometimes during the day people gave way to the great parade of the marching elephants trunk to tail. Between the shows the elephants were being led to a watering ditch. Eldridge used an Ankusha to guide Mary. According to eyewitness, Mary suddenly stopped, might be because she spotted a piece of watermelon. Although Eldridge was warned before to use the bullhook gently without provoking the animal, he might forgot it and jabbed her roughly with the tool. Mary became angry and attacked Eldridge, lifted and threw him, finally she smashed his head as a melon. Later a veterinarian examined Mary’s carcass and found a severely infected tooth where Eldridge had prodded her which might explain her rage.

The panic broke out, despite of Charles Sparks’ quick intervention, when he calmed Mary down. The vengeful crowd demanded the death of Mary. In addition the news of the incident spread quickly by media which nicknamed the elephant to “Murderous Mary”. In addition the next station of the circus informed Charles Sparks about their decision: it wouldn’t be allowed entering the town with Mary. In other cases the man killing elephants were used to rename and sell to other circus in secret, but after this propaganda it was not possible. So, Charles Sparks had to make a painful decision. He finally announced to satisfy the people’s desire with a public execution. After considering several methods of execution, finally he chose hanging as more “human” and safe mode. Clinchfield Railroad had a derrick which was high and powerful enough in Erwin, so on 13th of September the circus moved to there. More than 2500 people were waiting for the big attraction. Although Charles Sparks trained and moved the elephants as usual, according to the eyewitnesses Mary was very nervous as if sensed her destiny. Her death was painful, because at the first attempt the neck chain broke and the elephant fell to the ground causing panic in the crowd. The second attempt was more “successful” so the famous photo of the dead elephant was able to be take.

Naturally, the judgment of this case is quite different today. The memory of Mary survived as an idiom. According to the Urban Dictionary “hanging the elephant” means:
“The act of punishing an animal, child or employee for actions brought about by poor training, poor parenting or poor supervision when there is no retribution for the trainer, parent or supervisor who caused the issue in the first place.”

It was not the only elephant execution in America. In 1903 an also man-killer elephant, Topsy was killed in New York, in also painful mode: with electrocution. The sin of Topsy was killing a drunk spectator who burnt the tip of her trunk with a cigar. But it is another story…